A New Hope - The Trump Era is almost over

So it is just about 1 month after the 2020 US national election day. It took a few days after election day to finally call it for Biden/Harris. As of today 12/4, the current president, D. Trump, is still filing lawsuits and refusing to concede the election. The headlines since Nov 4th have made me feel everything from dispair, to hope, to joy, to confusing, and to question everything.
Honestly guys, somedays I haven't been able to tell which way it up. Over all, I feel hopeful. Now this has a couple of parts:
1 - the election of Biden/Harris
2 - I've been listening to Obama's new memoir
3 - I've been staying off social media
So I'll start at number 3 and work my way up.
I've been staying off of social media.  So as you can see I haven't written any blog posts in a while.  Along with not blogging, I haven't been posting on Twitter or Facebook, or even Instagram as much.  I have done a pretty good job of cleaning my feed of negative people but of course, well-intentioned people post crap as well and their friends start responding and then I feel dragged in.  As a result, I have simply been stay off of it all.  I've been cross-stitching a lot.  I'm really busy with work too.  Oh, and since I work from home 3 days a week, I'm momming more which also keeps me off the computer.  It has been a good break.  I need to blog more.  I have so many feelings but I also like not being on the computer or tied to my phone.
I've been listening to Obama's new memoir.  I listen to an audiobook on the way home from work.  I have a 2-hour commute so it is a nice escape while I drive.  I got former Prez Obama's book on it's release date.  It is close to 30 hours so I'm not very far in yet, with only 2 days on the road.  I will say this, listening to his voice is soothing.  Listening to life from his view reminds me of the hope and excitement of his election.  Every since I saw him address the 2004 Democratic Convention, he has had my attention.  At one in the book, since it is audio I'm not sure I would ever find a page to give you, but anyway, he talks about Michelle questioning his motives.  His answer to her had me in tears as I drove.  I was filled with so much hope or maybe the memory of young naive hope.  I got home and I was and still am reenergized to change the world.  I still have time to make a difference.  After four years of feeling defeated and like the bad guys always win, now I'm hopeful for the future.
The first move towards hope was listening to Biden and Harris at their victory speeches.  I looked directly at my husband and said, "The good guys won.  I can't believe it.  The good guys actually won."  Now don't take me to mean that I'm a Biden devote or that I think Harris has all the answers.  I believe there is a lot of work ahead and I pray they are up to the task of building a unified American.  But do hear me on this point, since the election of D. Trump, I've been scared.  I've seen/felt an escalation of explicit racism and harm towards anyone that is not White, Cisgendered, and Heterosexual.  I have written it about it before I am a very privileged person but I am also an oppressed person.  With that in mind, the
last 4 years have felt like the bad guy always wins.  No one has stopped Trump seemingly in any way, not Republican, not Democrat, not military, no one has stood up to him and survived.  It felt horrible.  It felt hopeless.  Even now, I can't believe how close the vote was this election cycle.  But y'all it felt like the good guys won.  It felt like all of the conversations worked and we got enough people out to vote and that vote meant change!  It's good.  It feels good.  Come on January 21, 2021! 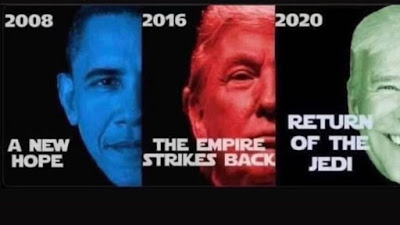