"She has to work twice as hard as others to meet the standards of the dominant culture which, have, in part, become her standards." - Gloria Anzaldua  Borderlands pg. 71

I started this post a few weeks back and just had not come back until today.  Why today?  Today, we got official word that SACSCOC is pulling Bennett College's accreditation and essential putting the dead nail in her coffin.  Who is Bennett College?  They are one of the few single-sex colleges created to educate Black women.

So who cares?  Well I do.  I attended Hollins University an all-women's university.  My husband attended Howard University, the HBCU.  I work at Wiley College, which is a HBCU.  Between undergrad and grad school, I have spent 12 years in institutions of higher education as a student and I had 1 Hispanic professor.  ONE!

Again, so?  Well a recent survey of recent college graduate conducted by STRADA tells us that college students want mentoring by their professors.  Those who were mentored where more likely to finish/graduate and go on to graduate school/work.  Students thrive on relationships with faculty and guess who the faculty are?  The majority are White, middle to upper class men.  While I did have a White Middle-Class Male professor to mentor me as an undergrad, I also attended a small private college.  I was not completing with many other people.  I was a History major at college with a strong department.  Even with that, my dreams were to be a public school teacher.  I didn't really think I could do more.  Just finishing my BA was going to be a huge achievement.  I couldn't dream bigger.

What if I had had that 1 Hispanic professor during my undergraduate days instead of in my 2nd year of doctoral work?   Meeting him, having him as a professor, was the 1st time I realized I wasn't so alone in my pursuit of a doctorate.  REPRESENTATION MATTERS!  Would he have changed my path?  Doubtful but maybe I wouldn't have been so afraid all of the time. I saw people of color cleaning the colleges and universities I attended, they did not teach or run them.  I saw limits not opportunities.  Having Dr. SME was the 1st time I saw a limit shattered.  He had crossed a line and survived.  I did not know we could do that.

Okay back to the title, I am a Brown profesional woman and thankful for the moment I am working at a college that is majority colored people.  But I haven't always worked in that kind of an environment and even now I worry if I am living up to the standard of professionalism before me.  Are those standards self-imposed or are they in reaction to the standard of "White" colleges and we just trying to keep up?   We are told to dress the part so that our students know how to dress when they are out there.  We know that out there means the Standard White American World.  I don't just wake up and dress in my starched white collared button up and black slacks and head in.  No, I need to do my hair and now I have an added make-up routine.  With this comes the question of what is professional hair and make-up?

See if you grew-up watching Mexican Telenovelas, like I did, you know curly headed women are crazy.  (This is a different topic to go into so just roll with me for the moment.)  So until I started here at Wiley, I straightened my hair daily.  I had to look like the professionals I had seen on TV and even on standard American television, the standard for professional female hair is straight.

The make-up is a horrible thing to tolerate.  I don't like wearing any.  I feel like it is a mask.  But if you read blogs and articles about professional female dress, they all say foundation, lipstick, and mascara are the minimum.  On a good day (around here that is Tuesday - Chapel Day), I wear black eye-liner and red lipstick.  I can't stand foundation and I rub my eye so much that mascara and I don't mix.  But who set this make-up standard?  I am beautiful without the crap and I am still under pressure to wear it.

Until the majority of the professionals we see are representative of our nation's actual make-up then I argue those of us who are professionals of color are just trying to catch the bus by "looking" as white as we can.  The standard in this country is White.  My look is measured by how close to pulling off Ivanka Trump's look I can get.  If I was in Mexico, I know I would still have to live up to some standard but maybe it would feel less oppressive if the standard was a little darker like me and had natural curls and waves that they would let fly every once in a while. 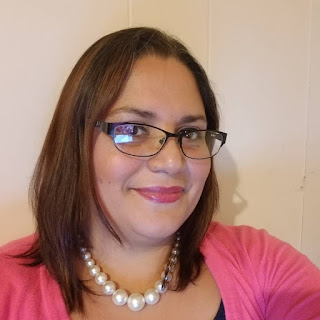 This picture is from the day I interviewed with Wiley.  Note the straight hair and lipstick.  Now a days I sport crazy waves and curly on the days my hair works with me.
Posted by Martha at 11:25 AM