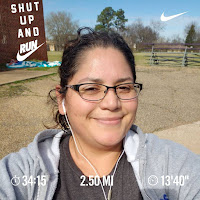 I tend to scroll my Facebook feed to give myself a mental break and I'm usually just scrolling looking for interesting news items and good things happening for my friends.  Today as I quickly scrolled past a posting and then backtracked a moment and then burst into tears right at my desk.  I'll post the drawing itself at the bottom of this post so you can see it or avoid it if you think it will trigger you.

Like a said I was crying at my desk and it was 15 minutes until my lunch.  I couldn't help it.  I finally got myself under control and then it was lunch time.  I usually run/walk during my lunch break so I headed out ready to move and the post came back to mind.  I was running and crying and trying to figure out why.

The post/drawing is about rape.  That in and of itself is sad and traumatic.  But the post eludes to babies being raped.  Even now, I'm on the verge of tears.  The hurt, the horrible things that people do to the smallest and most vulnerable.  It makes me feel powerless.  How do you protect babies from the people who are supposed to protect them.

So why was I crying?  Maybe for my girls who I know I can't fully protect and that more than likely at least one of them will have to fight and protect herself from an attempt or deal with the fallout of being raped.  Maybe for the women that are silent even now, maybe silent even more so now because the fallout of telling is more traumatic than the rape/assault itself.  Maybe for myself and my #metoo moments.  I ran and I cried and I fumed.

What can we do?  We women can learn self-defense.  I am supposed to teach my daughters to fight back and dress right and on and on but there isn't a movement to teach people not to rape.  The fault lies in the woman.  She was asking for it.  She didn't protect herself.  What about the ones, the little ones, the disabled ones, that can't talk, defend, fight off?  If you don't/can't say no then free-for-all?

Are we supposed to reward the men that do the right thing?  Are they being congratulated for being men or do other men look down on them for not finishing the job?  I am reminded of a time I did all the wrong things.  I was at the club alone, I walked out of the club alone, I had flirted with a dude I had zero intention of ever going home with, I'm sure I was dressed in some version of sexy.  All the wrong things and nearly paid for it.  The guy followed me to my car.  I was half a block from the club.  I was on the street in clear view of everyone and he followed me to my car and then I did the exact wrong thing, I opened the car door and all he had to was push me in.  He instead pulled me out of my car.  He saw the fear in my eyes and suddenly let go and left.  I see how close to disaster I was only years and years later.  What if anything does he remember?  Should I congratulate him for not raping me when he had the chance?  Hey dude, you saw me as a human, thank you!  Does he wish he had pushed instead of pulled?  Does he have shame for not finishing equal to my shame in having done all of the wrong things?  Rape . . . 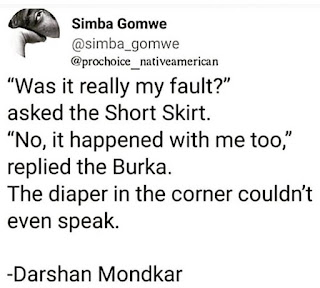